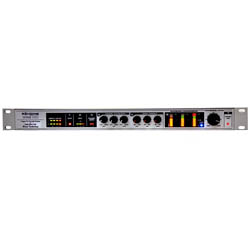 The Audimax 362 has 7 analog processing stages and the digital stereo coder. It works with 3 audio bands and has 7 front panel controls for customizing the sound so that your radio sounds different to others. Its low price makes it an propriate choice for community FM radios and low power stations. Model 362 HD has simultaneous stereo balanced outputs for audio stream-ing in Internet, and a coaxial MPX output for FM transmittance. The 362-IT model is an excellent processor for WEBcasting because the analog inputs have internal equalisation for optimal performance of streaming.

Processor 1: An audio expander guarantees the elimination of background noise at times when there is silence

Processor 2: An AGC (Automatic Gain Control) ensures constant audio level at the input of the multiband system. It avoids variations in the level of your radio transmission due to different announcers
or even operators errors.

Processor 3: A phase rotation system uses the Kahn-Bonello technology for cancellation of asymmetric peaks. This eliminates the asymmetry of the human voice that reduces the reach of the radio and gives a sensation of weak sound.

Processor 4: Dynamic Equalizer is a dynamic audio EQ of 3 bands that allows reinforcing certain frequencies, (generally the bass) to have a sound with a loud punch. Unlike the conventional equalizers, whose action is lost for high levels of modulation, this equalizer emphasizes its action with high modulation.

Processor 5: The Band Energy system increases the peak density for the 3 bands. This allows high loudness signals. These knobs allow selection of aggressive or smoother sound

Processor 6: The Multiband Compressor is the core of the processing system, constituted by independent audio compressors that work at 3 band-frequencies. Low, Mid and High. The attack times are automatic. The Band Energy controls allow modifying the input gain of the compressors. An Intermodulation cancellation filter gets a crystal clear sound.

Processor 7: One MPX clipper of peaks with up to 6 dB of action level (using a Super-Modulation technology), increases the audio signal between 2 and 3 dB, without over modulation